This is a twitchers-only homepage 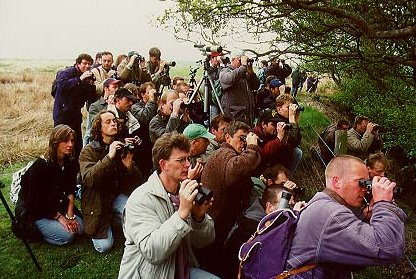 On this site I will give you an overview of my new species of birds observed in the Netherlands from January 1st 1990. Birding (or better: twitching, the chase for rare birds) in the Netherlands is rapidly growing, with an increasing number of young birders, resulting in the finding of more and rarer birds. The following table below shows the years, each year linked with a list of birds, representing a link towards a photograph of the particular bird and the story behind it. It started as an exercise of an HTML-course I took in 1995, so the lay-out is very 90s-like. Anyhow I can pretend this is the oldest weblog about birds in the Netherlands.

(under construction and in Dutch). All my new species in the Netherlands since January 1977; Every decennium has a different colour. e.g. the seventies are grey.

I would welcome suggestions, remarks or even insults!